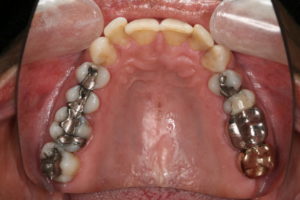 It has been observed that symptoms related to heavy metal toxicity may be exacerbated with the disturbance of mercury amalgam and other toxic metals caused by electrical currents between dissimilar metals in the mouth, a process called oral galvanism.

Even higher levels of current are often found between metal crowns in direct contact with mercury amalgam fillings. There are several ways you could have more than one metal in your mouth.

A mercury-amalgam filling in one tooth and a gold inlay or crown on another.

A visible wearing sign of galvanism is electrolytic corrosion of the metals in the mouth.  This “rusting” results in leaching of the heavy metal ions into the body which can cause allergic reactions or toxicity. When mercury-amalgam fillings are near gold-alloy crowns or porcelain crowns containing metal-alloys, the mercury released into the body can be as much as ten times greater when compared to mercury fillings alone.  Metal-based crowns placed on titanium implants often cause oxidative pitting corrosion of the implant which can result in chronic inflammation of the gums and bone surrounding the implant.

There are a variety of symptoms related to oral galvanism, many of which have been noted to improve when the oral galvanism is reduced.   These may include: an unpleasant metallic taste, burning sensation to the tongue and usually dry mouth, headaches, migraines, dizziness, nausea, amalgam tattoos, lack of concentration and memory, insomnia, psychological problems, tinnitus, vertigo, epilepsy, hearing loss, eye problems, and others.

The RITA Meter® is used to measure galvanism or the “battery effect” created by dissimilar metals in the oral cavity. With the RITA meter, we can quantify the amount of electrical current released by every metal restoration in the mouth from the highest to lowest millivoltage. The results of this test determine the order in which your mercury-amalgam fillings and other metals should be removed, known as sequential mercury removal, which is endorsed by the Huggins-Grube Protocol.

If you have evidence of oral galvanism and/or its effects, the solution is to replace the metals in your mouth with biocompatible metal-free materials – composite or ceramic restorations, Metal-Free Dental Implants, and non-metal partials. Depending on how long you’ve been living with the effects of galvanism, additional work with an integrative physician, naturopath, and other health professionals may be needed to help bring the body back into balance.

Drs. Kinney strongly believe in using only the most bio-compatible materials available to prevent your exposure to toxic dental materials. We accomplish this by offering metal-free, BPA-free, and fluoride-free materials to restore your teeth. We provide compatibility testing using BioComp Labs to identify the safest choices before placing any new dental materials in your mouth. In addition, our office does not use fluoride and you will never be offered fluoride treatments like almost all conventional dental offices routinely do. Fluoride is a toxin known to cause damage to the thyroid, bones and other organs in the body. For more information about fluoride, click here

If you have been searching for a caring and experienced Biological and Holistic dentist, or have questions about our practice, we invite you to request your personal consultation with one of our doctors today. Please click below to request an appointment.
Click for Appointment